A Few MIsunderstood Verses in the B'rit Hadashah

Today I thought we'd take a short look into some misunderstood verses in the B'rit Hadashah.

Was the Ethiopian "eunuch" in Acts 8:27 actually a "eunuch?

Acts 8:27  And he arose and went: and, behold, a man of Ethiopia, an eunuch of great authority under Candace, queen of the Ethiopians, who had the charge of all her treasure, and had come to Jerusalem for to worship.

A eunuch would never have been allowed into the temple. He was obviously a "believer" because the verse above says he came to "worship". The problem lies in the translation of the word "eunuch". It is most likely that the Book of Acts was originally written in Aramaic. The Aramaic word "mahimna" can mean either a "Eunuch" or a "Believer". This agrees with the Peshitta (Syriac Aramaic Bible) which has the word "believer" there instead of eunuch. He was a man of great authority, the treasurer for Candace, the queen of Ethiopia. Candace was not her name though, but a title for all queens of Ethiopia. It is akin to the title of Pharaoh or Caesar.

Mat 26:6 Now when Yahushua was in Bethany, in the house of Simon the leper,


Simon was NOT a leper. A leper was not even allowed into the city. The Jews would not be attending a dinner at a leper's house. The Peshitta has the correct understanding. Simon was a potter or jar maker.

Although the word for leper used in the Torah is "tsara", the Hebrew word 'garab' means "Scab or itch" (Lev 21:20, Deu 28:27). The Assyrian word for leper is "garaba". The root of the Hebrew word "garab' means "a scabby type skin disease'. Garba, on the other hand,  is a potter in Aramaic. It's easy to see how a simple scribal error could have caused this mistranslation. Remember, the B'rit Hadashah was originally written in Aramaic, a dialect very similar to Hebrew.

A leper would not have been able to own property, employ servants or hold a Feast that the Jews could attend. Some might say, and have said when recognizing the difficulty, that he was no longer a leper as Yahshua may have healed him. This doesn't work either as he would no longer be called a leper; he would have been pronounced clean according to the law.


Can a Camel go through the eye of a needle?

Mat 19:23 Then said Yahushua unto his disciples, Verily I say unto you, that a rich man shall hardly enter into the kingdom of heaven.


Mat 19:24  And again I say unto you, It is easier for a camel to go through the eye of a needle, than for a rich man to enter into the kingdom of Elohim.

This is another example of a mistranslation of two similar words. The Aramaic word for camel is "Gamla" whereas the word for a heavy rope is "Gamala".  The implication from verse 23 is that it is difficult for a rich man dragging around all that heavy baggage (riches) to enter the straight and narrow path (eye of the needle) leading to salvation. They are too attached to their possessions to put their priority into walking the narrow path which leads to salvation. This is not saying that a rich man cannot be saved as even a heavy rope can be unraveled and passed through the eye of a needle one strand at a time. It just takes effort. (Info from Aramaictruth.org)

Are we promised to receive everything we pray for?
Sure sounds like it to me if you read it the way it is written. But let me tell you something, it doesn't always work. Isn't that a promise that we will get whatever we pray for? I've prayed for a lot of things I never got. So what's the problem? My faith isn't great enough? Or... could it be that YHWH's will is also involved?

The words "All things whatsoever" is a translation of the Greek words "panta hosa an". This is a  conditional statement when the "an" is attached. In the English translation, we don't see any difference between the Greek original 'panta hosa' and 'panta hosa AN'. But that little word 'an' attached to the phrase makes it conditional. The English translation should leave out the words "whatsoever" because there are certain conditions that have to be met. It has to be in YHWH's will and meet His conditions for us to receive anything. And yes, we need faith too.

Mat 23:2  Saying, The scribes and the Pharisees sit in Moses' seat:
Mat 23:3  All therefore whatsoever they bid you observe, that observe and do; but do not ye after their works: for they say, and do not.

Here is another example of "panta hosa an". This is a conditional statement, not a broad brush to do everything the Pharisees sitting in Moses' seat say to do. The seat of Moses meant legislative and judicial authority, not theological. This is a call to Torah and to distance ourselves from the corruption of Moses seat by the extra prohibitions the Pharisees had added to Torah. It basically means that if they tell you to do something found in Torah, to go ahead and do it. But, don't do as they say if it is not found in Torah. Yahshua was specifically referring to those things the Rabbis told others to do, but refused to do themselves.

Their works are called "takanot" in the Hebrew. Takanot are defined as changes that modify bible law. They are the "works" of the Rabbis which includes their oral traditions.

These are just some of the things that are misunderstood in the B'rit Hadashah. I'll quit for now and save more for later.

We started this week off good by attending a presentation by Rico Cortez in Kerrville, Tx last Sunday night. He spoke on the Temple Service and the Daily Sacrifices. I obtained a 5 DVD set by the same title and it is really good and informative. How many of us really know about the Temple Service? It really is something we all should study and learn about. When I learn a bit more about it, I will comment on it. Some of the things Rico talked about were really fascinating.

I also took the time to go to Houston for a few days to visit my daughter and grand kids. So, I didn't have much time to prepare any little gems of wisdom to post here. Here are a couple of pics of a grizzled old coot with his grand kids. 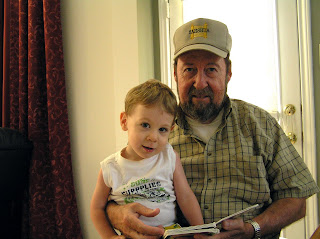 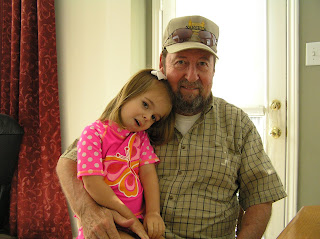 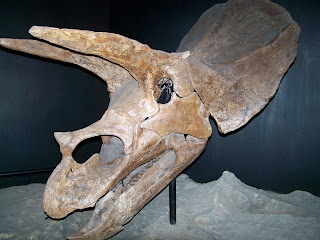 While I was in Houston, we took the grand kids and went to the Museum of Natural History there and took in the fossil exhibits. I think I am about as old as the fossils :0)

Something cool about the Ancient Hebrew Pictographs

Hebrew is the only language in the world where the letters and the characters represent letters and meanings at the same time. For example, the letter "bet" corresponds to our letter B. In Hebrew, the letter "bet" has a "b" sound and is used as a letter in forming words. But, it's pictograph is the picture of a floor plan of a tent. The meaning of the letter "bet" is "house, home, abode or family." Similarly, the Alef (our A) which is depicted as an ox head in the ancient characters, means "head, first or mighty one". The Hebrew word for father is written Ab. It's ancient meaning was "the head of the household or family".

So, looking at the word "Torah" in the ancient pictographic Alef-bet, the word Torah is spelled Tav vav resh hey. I can't show the ancient characters as this blog doesn't support them, so I will just describe them. The first letter is 'Tav' which corresponds to our letter 'T'. It's ancient meaning was "Covenant or sign of the covenant". Our next letter is a 'vav'. It's symbol is a "tent peg or nail." It is pronounced here like our letter O. Next, we have the letter "resh" which is depicted as the head of a man, It meant "person, first, head or beginning."  And finally, we have the letter "hey". It is shown as a man with his arms raised and means "Behold, look, see." This is probably where our English expression "Hey!" comes from.

Now for the neat part, we can put these meanings all together and we have "Behold! A man nailed to a cross." The cross is the sign of our covenant with YHWH. Who was it that was given for a covenant for the people?

Isa 49:8 Thus saith YHWH, In an acceptable time have I heard thee, and in a day of salvation have I helped there: and I will preserve these, and give thee for a covenant of the people, to establish the earth, to cause to inherit the desolate heritages;

Isa 42:6  I YHWH have called thee in righteousness, and will hold thine hand, and will keep thee, and give thee for a covenant of the people, for a light of the Gentiles;
Isa 42:7  To open the blind eyes, to being out the prisoners from the prison, and them that sit in darkness out of the prison house.

Who does this refer to? It is Yahshua, our Messiah. He is the living Torah. Consider the following verse of scripture:

Most translations still unfortunately translate "Torah" as "law". It gives a false understanding of the word "law" in the New Testament where it should have been translated "Torah".

We are all familiar with this verse:

Joh 14:6  Yahushua saith unto him, I am the way, the truth, and the life: No man cometh unto the Father, but by me.

Now we see Torah is equated with truth in Psa 119. Didn't Yahshua say HE was the way, the TRUTH and the life? Yahshua is the living Torah. It is all about him from Genesis to Revelation. The whole Bible can be considered "Torah" as it contains the instructions of how YHWH expects us to live our lives. It is our instruction manual.


Now this brings me to the word "truth". In Hebrew, the word is "Emet", spelled Alef Mem Tav. We have the Alef for our mighty one, in this case YHWH or Yahshua. The "mem" is the 'essence, being and spirit". And lastly, the "tav" represents the covenant. When we put all of the letters and meanings together, we see it means "Truth is the spirit of YHWH/Yahshua."So we can conclude that the Torah is the Spirit of YHWH.

Incidentally, the 'mem' also represents water in Hebrew and is symbolic of the Holy Spirit (Ruach HaKodesh), not oil as is commonly taught. Oil in scripture represents the "Torah".

Joh 7:38  He that believeth on me, as the scripture hath said, out of his belly shall flow rivers of living water.
Joh 7:39  (But this spake he of the Spirit, which they that believe on him should receive; for the Holy Spirit was not yet given; because that Yahushua was not yet glorified.)

And one more for dessert....

Sorry I couldn't use the ancient Semite character font, but it isn't allowed on this blog format.

The Fear of YHWH is the beginning of wisdom

Our world is full of opinions on how to improve mankind's present situations. Many are turning to all kinds of sources of information in order to gain a better understanding of just what in the world is really going on when it comes to Politics.


When Does the Hebrew Day Begin?